A number of large surveys (e.g. KiDS, DES, SDSS, DESI) aim to map the 3D structure of the Universe to understand the nature of dark matter and dark energy. To achieve the required statistical precision, these focus on large scales, sparse samples of selected spectroscopic targets, or restrict the line-of-sight resolution by employing photometric redshifts based on a few broad- bands (BB). In contrast, studies aiming to explore the role of environment are limited to the small scales provided by pencil-beam surveys. We need to bridge this gap and probe the intermediate to small scales (below 10-20 Mpc/h), i.e. the weakly non-linear regime where the statistical signal-to-noise is largest. Our currently limited understanding of these scales, where baryonic and environmental effects become rel- evant, has to improve dramatically over the coming years to allow for a robust separation of cosmological and galaxy formation effects. This requires surveying large contiguous areas while simultaneously achieving a high number density of galaxies with sub-percent photo- metric redshift accuracy. This is now possible thanks to PAUCam: a unique combination of a large field-of-view and 40 narrow-band (NB) filters (12.5nm FWHM) that span the wavelength range from 450nm to 850nm and that was commissioned successfully in June 2015 on the WHT. This exquisite wavelength sampling results in photometric redshifts with a precision that approaches that of spectroscopic measurements, while being able to cover large areas of sky. 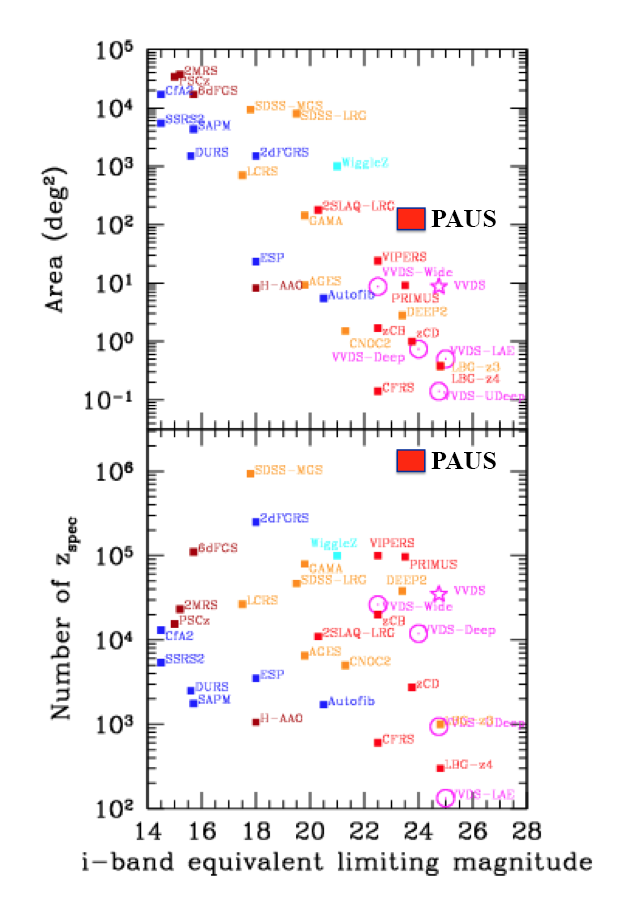 Comparison of the covered area (top) and the number of measured spectroscopic redshifts (bottom) versus depth expressed as the equivalent i–band limiting magnitude, between the VVDS (magenta) and different spectroscopic redshift surveys. PAUS will be a few magnitudes deeper (over 10 times denser) than current completed large area flux limited surveys (such as Gamma) and 10 times larger than current completed deep flux limited surveys (such as VVDS/VIPERS/Deep2) Adapted from:
Fevre, O. Le et al. Astron.Astrophys. 559 (2013) A14 arXiv:1307.0545 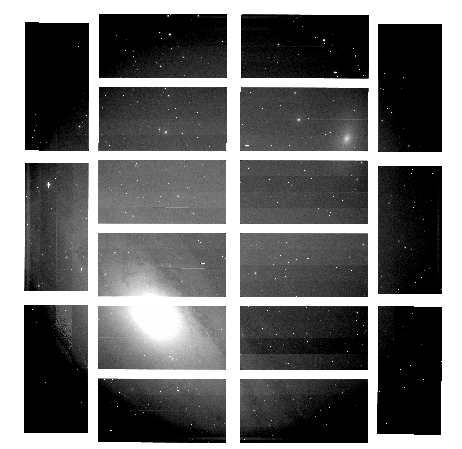 – Observe ∼100 deg2 to iAB ≈ 23-24 to reach a volume of 0.3-0.5 (Gpc/h)3 with a few million redshifts split into 3 to 4 wide fields (of several tens of deg2 each),   – in which shape and deep Broad-Band (BB) photometric measurements have already been obtained by CFHTLenS and KiDS, and in which spectroscopic redshifts for calibration are available from the GAMA, VIPERS, DEEP2 and zCOSMOS redshift surveys.    – Enable study of target selection incompleteness and to improve BB photo-z estimates (in KiDS, DES and Euclid) to reach the accuracy required for large-scale clustering and weak lensing analyses.    – Produce the most detailed studies of intermediate-scale cosmic structure analysis ever undertaken.    – First precise measurement of intrinsic alignments at z ∼ 0.75    – Enable cross-correlation techniques for redshift measurements, magnification and sampling variance cancelation studies